Customs was the simplest I’ve ever been through: our luggage was safe, we had all our teens, and we walked out into chaos outside the airport. People were standing along the edge of a gate perimeter that was on the street.  We saw a sign “St. Francis of Assisi”! It was Carlos Andres.  He felt familiar and safe—just because I knew he was expecting us. “Please, call me Andres,” he introduced himself.  Andres introduced us to our driver, Juan Carlos, and our bus loaded, we headed back  to Casa de Retiros Claret: half home for retired Claretians, half retreat center. 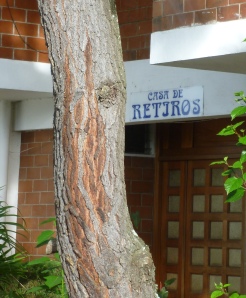 Andres had keys so we were able to enter so late at night.  We said goodnight to Juan Carlos and hauled in our luggage, up 3 flights of stairs, through the common room, and into a hallway lined with rooms on each side.

The men took that hallway and the women got the second floor, except for Ana, Jen, and me who stayed on the floor with the men. I was too tired to lug my stuff up another flight of steps, and very grateful that there weren’t enough rooms upstairs: I happily volunteered to take one for the team.

I emailed to let people know I had arrived safely, unloaded my clothes, and promptly passed out, wiped from the travel.

We woke up for prayer at 7:15, followed by breakfast at 7:30.  The center had 4 or 5 women who cooked for us for all of our meals–amazing food, albeit mostly American food–and they prepared us well for our first day with a meal of scrambled eggs, rolls, fruit, and general scrumptiousness.

Our foray into the city begin with Juan Carlos picking us up for what was one of the worst days of traffic: apparently, things are busier on Mondays, Tuesdays, and Fridays.  My first surprise in Guatemala happened immediately.  Jen told me that our first stop was city hall, to pick up the two policemen who would escort us for the day–I’d missed that memo, being in Maryland for all of the pre-meetings in Michigan.  As an adult chaperone, I got prime real estate on the bus–front row! I could see EVERYTHING as we inched through traffic.  Bright colors, stopped cars, mountains (and a volcano): I was in heaven with so much to soak up around us.  Oh, and guns. Guns all over. (Second surprise). 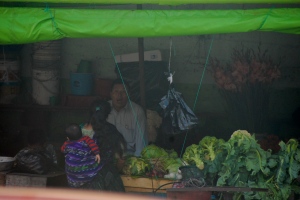 It took us nearly two hours to scoop up our policemen and then head to St. Francis Coll– our first step along our orientation to different pieces of the work that International Samaritan does in Guatemala.

St. Francis Coll, an elementary school, services kindergarten through sixth grade; the younger kids we would see later at the nursery, the older kids, at Paso a Paso.  It is in the garbage dump community–to reach it Juan Carlos navigated our bus through tight roads that were overflowing with piles and bags of sorted trash: plastics, metals, glasses.  Men were working, sorting, even at the early hour.  Dogs roamed everywhere: scrawny, limping, dirty dogs.  This reminded Andres and he warned the kids not to pet any animals that came up to us.  Juan Carlos backed our bus down the alley that led to St. Francis Coll, and we were there. Finally! 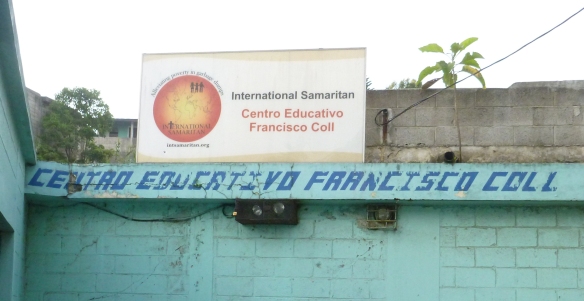 What’s on my mind?